Unilode Aviation Solutions owns and manages the world’s largest outsourced fleet of unit load devices (ULDs), which are containers and pallets used for the transport of freight, baggage, and mail on aircraft. It also provides ULD and inflight food service equipment maintenance and repair services.

ULD loss is an age-old problem in aviation. As the only aircraft part that leaves control of the airline and passes through various ground service providers, shippers and freight forwarders, ULDs are easily misplaced. With over one million ULDs in circulation globally, airlines have up to 200,000 ULDs in the wrong place at the wrong time.

A shortage of ULDs impacts an airline’s ability to meet customer needs and keep costs down. Replacement of ULDs and holding additional inventory due to inefficient processes cost the airlines millions of dollars a year.

Unilode recognized this problem and had the vision and commitment to apply OnAsset monitoring technologies to its vast fleet of ULDs spanning the globe. The results of its implementation have exceeded expectations. Asset availability is up and benefits are being passed on to customers.  A true win-win.

The search for solutions

RFID/LORAWAN was good in that it is low energy and inexpensive. But the infrastructure and readers necessary to support this technology on a global scale was undeployable & would have been met with large expensive infrastructure needs. Unilode needed a custom built-to-scale product for its large ULD fleet and network, and broad base of customers. Not to mention, RFID and the frequency in which it operates is not approved in every country in the world, and Unilode’s ULDs travel to around 250+ countries.

GPS is approved in all areas except for China, which uses its own system. GPS was an accurate form of technology, but battery life was measured in days instead of years, and the mobile network costs are extremely expensive.

Unilode researched all technologies to help guide its decision to adopt an asset management solution for its fleet of approximately 140,000 ULDs. The decision to adopt OnAsset Intelligence was made in mid-2019 based on several key factors.

Unilode assigned a special projects team to roll out OnAsset technologies. The team worked with 45 airlines. Securing approval from each of them was the first step. OnAsset has done extensive testing with airlines and was able to provide details on each test for airline leadership to accept. Unilode led the conversations and meetings with the airlines; OnAsset managed the technical aspects of testing with the airlines.

Meanwhile, on a parallel track, Unilode was negotiated contracts with companies that services the airlines on the ground to install readers in their warehouses. As the company worked through approvals with so many partners, it was laying the foundation for the actual rollout, starting in the areas of highest ULD fleet density.

Rollout on a global scale

With approvals in place, Unilode began tagging ULDs as they passed through airports. Unit tagging was underway as the team began establishing the SENTRY FlightSafe reader network, starting with the airports and areas with the highest concentration of Unilode assets.

Unilode’s extensive network of repair facilities helped expedite the tagging process. The tagging of assets kicked off at the end of 2019. With a three-year plan for tagging, and only a year-and-a-half into the rollout, the company is a about half-way done. Ultimately, it aspires to tag 140,000 ULDs.

With the network well-established, in addition to Unilode better managing its fleet of ULDs, its customers have insight into the shipments. Full-service customers have access to Unilode’s proprietary FAST web and mobile applications to monitor cargo movement, a benefit Unilode provides at no cost to customers. For an optional fee, they can access deeper-level sensor data made available through OnAsset tags, including temperature, shock/impact, light, and more.

At customer’s request, Unilode has gone on to install readers at customer sites and on valuable trade lanes so they have a complete view of the shipments, end-to-end. Shippers of high-end fashion, electronics and other valuable shipments are appreciating the insight to protect their products.

Unilode tracks its network in real-time from its Operations Control Center. The outcome of the investment and effort has exceeded expectations.  Even though deployment and tagging activities continue, Unilode and its customers have seen immediate improvements. 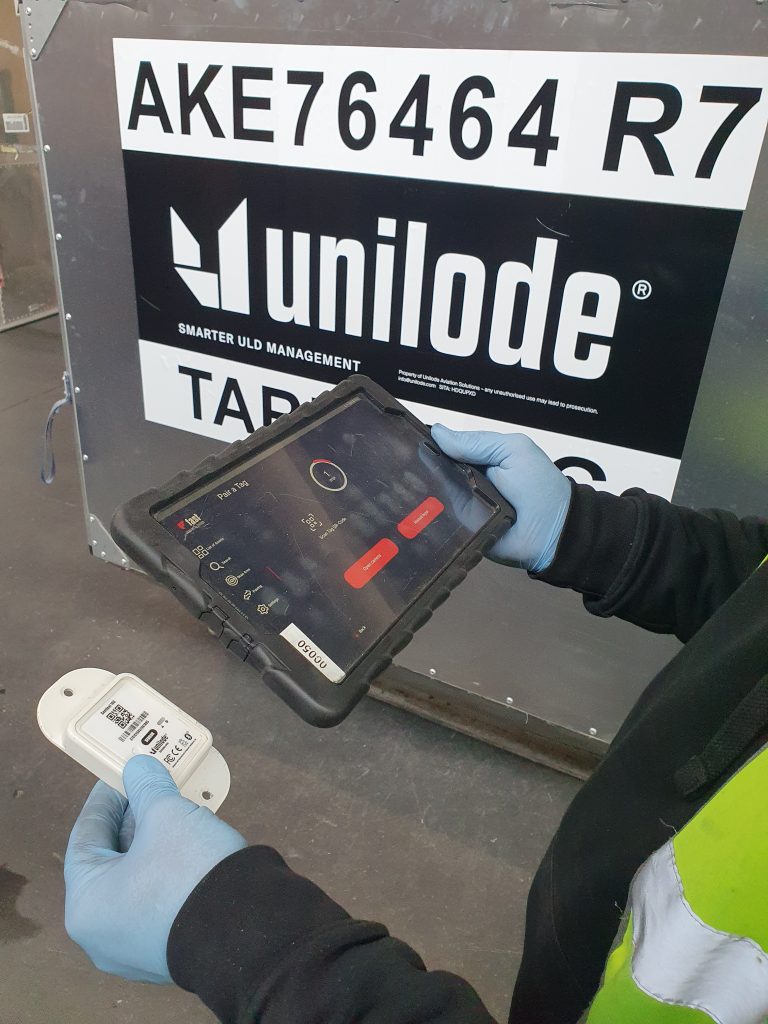 Scroll to Top Back to Top
© 2022 Unilode Aviation Solutions. All rights reserved.
Trademark registered in the United Kingdom, the European Union, Switzerland and the United States of America.
We use cookies on our website to give you the most relevant experience by remembering your preferences and repeat visits. By clicking “Accept All”, you consent to the use of ALL the cookies. However, you may visit "Cookie Settings" to provide a controlled consent.
Cookie SettingsAccept All
Manage consent

This website uses cookies to improve your experience while you navigate through the website. Out of these, the cookies that are categorized as necessary are stored on your browser as they are essential for the working of basic functionalities of the website. We also use third-party cookies that help us analyze and understand how you use this website. These cookies will be stored in your browser only with your consent. You also have the option to opt-out of these cookies. But opting out of some of these cookies may affect your browsing experience.
Necessary Always Enabled
Necessary cookies are absolutely essential for the website to function properly. These cookies ensure basic functionalities and security features of the website, anonymously.
Functional
Functional cookies help to perform certain functionalities like sharing the content of the website on social media platforms, collect feedbacks, and other third-party features.
Performance
Performance cookies are used to understand and analyze the key performance indexes of the website which helps in delivering a better user experience for the visitors.
Analytics
Analytical cookies are used to understand how visitors interact with the website. These cookies help provide information on metrics the number of visitors, bounce rate, traffic source, etc.
Advertisement
Advertisement cookies are used to provide visitors with relevant ads and marketing campaigns. These cookies track visitors across websites and collect information to provide customized ads.
Others
Other uncategorized cookies are those that are being analyzed and have not been classified into a category as yet.
SAVE & ACCEPT